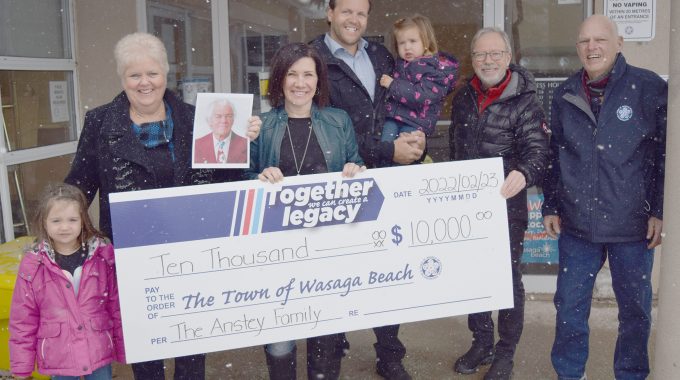 The Town of Wasaga Beach is pleased to announce the Anstey family has donated $10,000 to the twin-pad arena and library fundraising campaign.

“We are grateful for this very generous contribution from a family that has a deep historical connection to recreation in our community,” Mayor Nina Bifolchi said.

In recognition of the family’s donation to the new arena and library, the town will name a change room for Anstey, a well-known local plumber and realtor, and former town councillor from 1981 to 1985, who passed away in 2006.

“The construction of the current arena in the 1970s allowed Doug’s kids and grandkids to participate in minor hockey and figure skating in our own local arena. We look forward to Doug’s great-grandchildren having the same opportunity in the new twin-pad arena in our growing town,” the family said in a statement. “We’ve kept Doug’s memory alive through Wasaga Beach Minor Hockey with the ‘Doug Anstey Most Dedicated Player Award’ and we are pleased to make this donation in his name as we know he would be honoured to be a part of the next generation of skating in Wasaga Beach.”

Learn more about donation opportunities to the twin-pad arena and library project by visiting our website.